At the end of May, the Russian public prosecutor’s office qualified three German NGOs as “undesirable organizations”. It included the Berlin-based Center for Liberal Modernity (LibMod).

“This is also addressed to the German government because it has funded our previous cooperation projects with Russian partners,” said Ralf Fücks, co-founder of the independent think tank. He spoke to DW about Moscow thinking and the ramifications of banning the bilateral research project “Climate Change and Russia’s Economic Modernization”.

DW: Why did the Kremlin ban the Center for Liberal Modernism? Was it a revenge for the rejection of the Russian Nord Stream-2 pipeline? Has LibMod been punished for scientific studies purported to prove that Russia’s current economic model has no future because it is based on fossil fuels?

Ralf Fücks: Those reasons certainly played a role, but there were other factors as well. The Center for Liberal Modernity is a very critical voice in the German debate on Russia, which is whether cooperation with the Kremlin should continue at all costs or whether we should defend principles and values ​​when they are violated by Russian politics. The move is also part of a general hardening of German-Russian relations, which became apparent more recently when German Chancellor Angela Merkel clearly sided with Alexei Navalny after his poisoning and refused to accept the Russian story that the [Russian secret service] The FSB has nothing to do with it. Since then, one has the feeling that the tone has changed, that the Kremlin is perhaps no longer banking on a special German-Russian relationship but is more confrontational.

However, probably no other German NGO has focused as intensely on the Russian economy and in particular the Russian fossil fuel sector as LibMod. In the past six months, five studies on this topic have been posted on your website. Why is a Berlin-based NGO so interested in the Russian energy industry?

For our institute, and for me personally, environmental issues play a central role. I have been involved in environmental policy for over 30 years. Climate change is arguably the biggest global challenge today, and Russia is the world’s largest exporter of fossil fuels when you take oil, natural gas and coal together. As a result, Russia continues to fuel climate change. It also generates high greenhouse gas emissions in the home – it is responsible for around 5% of global CO2 emissions.

As a former member of the Board of Directors of the Heinrich Böll Foundation, I have also worked for many years with environmental initiatives and institutes in Russia. In this regard, it made sense that we dealt intensively with this subject. From the start, we have taken a constructive approach. Our aim was not to put Russia in the dock but to point to alternatives to the current economic model, heavily dependent on fossil fuels, and to develop scenarios for its successful ecological modernization.

But in Russia, even the intellectual elite are skeptical about decarbonizing the economy, as shown in a study released in May by the Russian opinion polling institute Levada Center on behalf of LibMod.

There is clearly a clear disconnect between international and Russian discussions on climate policy. There are still many more skeptical voices in Russia, including those who simply deny scientific findings or label them as a malicious plot against Russia’s economic interests. But I am sure that even Russia cannot turn a blind eye to the prospects and consequences of long-term climate policy. The country itself will be massively affected by climate change. Just think of the thawing of permafrost, the increase in periods of drought in the southern regions of Russia or the gigantic forest fires.

LibMod planned in June to launch a series of at least six studies with Russian experts on various aspects of Russia’s economic and ecological modernization. What will become of this project now?

We cannot continue this project because any cooperation with LibMod would constitute a criminal offense for Russian citizens. If Moscow declares us an undesirable foreign organization and, in fact, prevents us from cooperating with long-time friends and partners in Russia, this also targets the German government because it funded these cooperation projects. 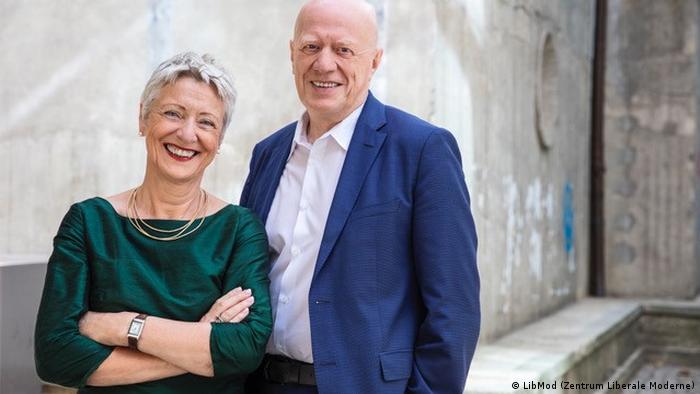 Ralf Fücks co-founded the Center for Liberal Modernity with his wife, Marieluise Beck

Will LibMod pull out of the problems in Russia and eventually focus on other post-Soviet countries like Ukraine?

We are already very involved in Ukraine. We see the country as a testing ground for the democratic transformation of post-Soviet societies. But we will certainly not turn our backs on Russia, but will focus more on the analyzes on Russia and on the debate around an appropriate Russian policy for the West. We are not saying goodbye to international expert networks.

Ralf Fücks heads the Center for Liberal Modernity in Berlin, which he founded with his wife, Marieluise Beck, in 2017. Before that, both were among the leading figures of the German Green Party for several decades. LibMod sees itself as an independent, multi-stakeholder think tank.

The interview was conducted by Andrey Gurkov and has been translated from German.